SAE – An abbreviation for “Society of Automotive Engineers,” an organization serving the automotive industry.

Semi Fluid – Any substance having the attributes of both a solid and a liquid. More generally, any substance in which the force required to produce a deformation depends both on the magnitude and on the rate of deformation.

Shear Stress – The force per unit area acting tangent to the surface of an element of a fluid or solid.

Sludge – Insoluble material formed as a result either of deterioration reactions in an oil or by contamination of an oil, or both.

Slushing Oil – An oil or grease-like material used on metals to form a temporary protective coating against rust, corrosion, etc.

“Soluble” Cutting Oil – A mineral oil containing an emulsifier which makes it capable of mixing easily with water to form a cutting fluid.

Solvency – Ability of a fluid to dissolve organic materials and polymers, which is a function of aromaticity.

Sperm Oil – A fixed nondrying pale yellow oil obtained from the head cavities and blubber of the sperm whale. Formerly used as an oil additive but now prohibited from use by law in the United States.

Splash Lubrication – A system of lubrication in which parts of a mechanism dip into and splash lubricant onto themselves and/or other parts of the mechanism.

Stability – Ability of a lubricant to resist natural degradation reactions upon exposure to UV radiation, heat, or oxygen.

Static Friction – The friction between two surfaces not in relative motion but tending to slide over one another. The value of the static friction at the instant relative motion begins is termed break-away friction.

Strong Acid Number (S.A.N.) – The quantity of base, expressed in milligrams of potassium hydroxide, required to titrate the strong acid constituents present in 1 gram of sample.

Strong Base Number (S.B.N.) – The quantity of acid, expressed in milligrams of potassium hydroxide, required to titrate the strong base constituents present in 1 gram of sample.

Sulfurized Oil – Oil to which sulfur or sulfur compounds have been added.

Surface Tension – The tension exhibited at the free surface of liquids, measured in force per unit length.

Synthetic Ester – Oil Molecule prepared by reacting an organic acid with an organic alcohol and possessing some lubricant properties.

Synthetic Lubricant – A lubricant produced from materials not naturally occurring in crude oil by either chemical synthesis or refining processes. 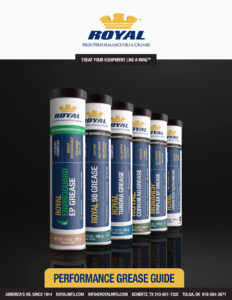